Suta and well seasoned? Or maybe too greasy and too salted? What was Polish cuisine like in the Middle Ages? Here's what our ancestors ate 500 years ago ...

In the late Middle Ages, foreigners praised the abundance of food our ancestors enjoyed, but not necessarily their cuisine. Some were delighted with the rich and well-seasoned meals, others complained that eating on the Vistula was too fatty and salty. What was Polish cuisine of the Middle Ages like?

Turnip and groats with beer

Today we can consider vegetables and fruits to be the basis of the food pyramid, but in the Middle Ages that was the place of cereals. Initially the kitchens, pantries and tables were dominated by the slightly forgotten millet, then rye and wheat .

Pods (peas, lentils, vetch or broad beans), considered very healthy and valuable today, were eaten (and valued). But root vegetables were also liked (turnip was eaten in Poland at the end of the epoch on a scale comparable to that of potatoes) and cruciferous (our ancestors took a taste for cabbage already in the 10th century). 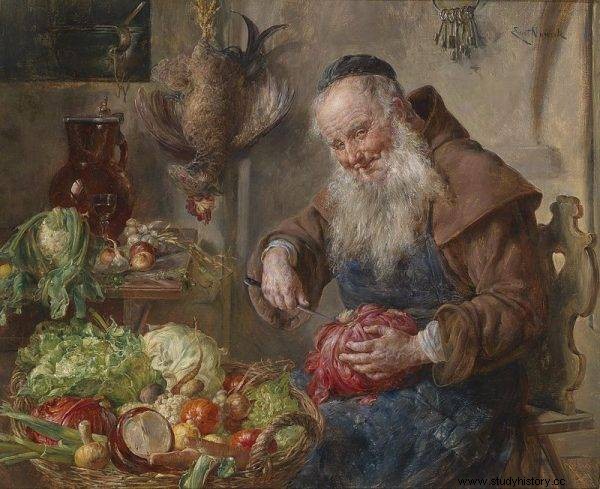 In the 15th century, buckwheat was popular, today known as the "queen of groats" and the Polish superfood. It was not served as an addition to dinner, but as a separate dish, e.g. topped with bacon, poured with beer as a soup or mixed with cooked pods and meat .

Of the meats, pork was the most popular (pigs were kept even in burgher houses). A lot of birds and fish were also eaten. Poultry was highly valued in the Middle Ages and played a much greater role on the tables of the wealthy than game commonly regarded as a delicacy of the high society.

Read also:Hungry ages. What was eaten in the Middle Ages and how often did people starve?

In turn, fish saved (and delighted) gourmets, especially during fasting periods. Meat was forbidden on Fridays, the eve of major holidays and the so-called dry days, that is, for three days once a quarter, and also during Lent (which lasted nine weeks until the mid-13th century).

Zygmunt Gloger writes about the popularity of various fish species as a Lenten day in Old Polish Encyclopedia :

During the days of the reign of the Piasts in Poland, ate in the post of communes herring, the most powerful domestic fish of better species . […] The documents of that time include fish species:moths, salmon, sturgeon, bugle, pike, eel, whitefish, tench, crucian carp, grayling […], salmon, sturgeon, catfish, lime, berzany, bleak, ticks, whitefish. 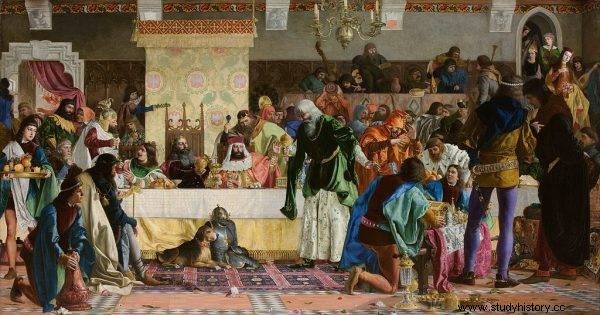 In the late Middle Ages, foreigners praised the abundance of food our ancestors enjoyed, but not necessarily their cuisine.

The techniques of preparing fish did not differ much from the modern ones. They were baked, fried in fat, grilled on a grill, made into stews or baked in dough. However, it was necessary to be very careful at the stage of purchase in order not to risk poisoning with stale goods. As we read in the book Experience the year in the Middle Ages by Tillman Bendikowski:

Fish traders are accused of being malicious when filling kegs with herring, only place fresh fish on the top and bottom, and are packed inside worthless and rotten.

Freak! Sometimes they even pour soil into the barrels to increase the weight. Herrings are an important commercial commodity, they are transported abundantly inland from the Baltic Sea coast, so an (undetected) fraud could pay off.

Truth in wine and bacteria in water

Today, the basic drink in most Polish homes is probably bottled water, but people in the Middle Ages could not count on the luxury of clean water. And they knew very well that drinking from an uncertain (nomen omen) source could end badly. As Tillman Bendikowski emphasizes:

Salt seawater aside, different types of freshwater are carefully distinguished:spring water, river water, pond water and well water , running water, from thaws and rainwater. […] Stagnant water should be drunk only when there is no water flowing.

Beer was much safer to drink, but depending on the purity of the purse, wine, honey or milk (both sweet and sour) were also drunk.

Dumplings for the king

Dairy was an important component of the diet - curd, dry and smoked cheeses were eaten. On royal tables, cheeses reigned in the form of stuffing for dumplings, which Władysław Jagiełło was fond of, or masses for sweet cakes and pies, which, in turn, were loved by Jadwiga. 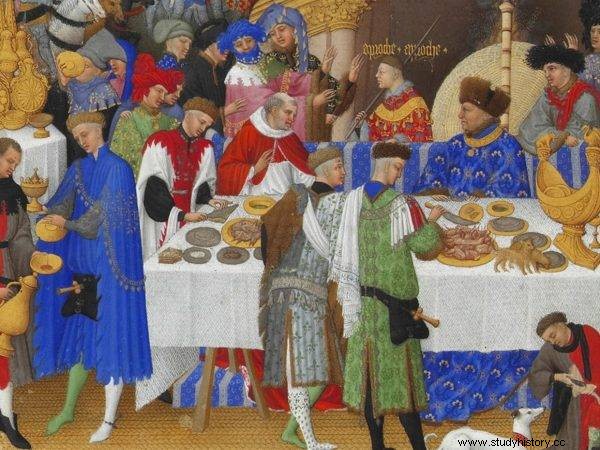 On royal tables, cheeses reigned in the form of stuffing for dumplings or sweet cakes and pies

For the king, "pirogi" was served with onion, widely used as a spice, as was garlic. Sauces based on them with the addition of fennel or cumin, and in the luxurious version - anise and saffron, were a popular addition to fish, which were prepared according to the then humoral theory . Such sauces were recommended, for example, by Stefan Falimirz in a publication in Krakow a little later, in 1534, On herbs and soaks them .

To other valued spices, mentioned by both Falimirz and Marcin from Urzędów, the author of Polish Herbarz written in a similar period They included parsley, dill, garlic, horseradish (compared to expensive and hard-to-reach pepper by Marcin from Urzędów), juniper, mustard, mint, cumin and aromatic tree leaves. The wealthiest, apart from pepper, bought ginger, saffron and nutmeg.

From the Herbarium published much later, in 1611, already during the reign of Sigismund III, Szymon Syreński, we know five types of bread:

1) wheat is the best royal bread or we call yours;

2) from medium flour, not entirely without bran, we make it urban or merchant;

3) bread is baked from common and common flour zhruba;

4) almost made of coarse grain, or very thick bran flour, the kind the peasants use in the countryside:it is grits;

5) it is and the fifth very big, from the undersized cereal or mixed with wheat, rye, oats, barley, tartar, millet, which Lithuania and Russia commonly use in the villages, and this is called boris, because boris people use it, especially in times of crop failure and hunger . 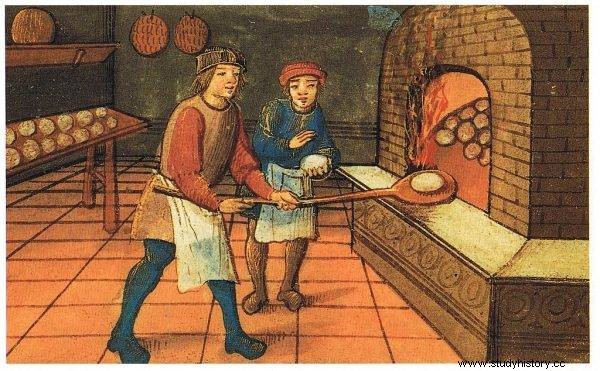 Bread united all states, although different varieties were eaten depending on the purity of the purse.

Bread connected all states, although different varieties were eaten depending on the purity of the purse. The most common table was rye bread or mixed bread, with the addition of barley and wheat flour, anise or caraway, as well as black cumin, which is also popular today.

Fashionable today and considered to be the healthiest wholemeal breads made of unsieved flour were considered penitential food for monks and ascetics who mortified themselves .

Medieval bread was baked with beer yeast and leaven. It was eaten a lot also because the loaves of that time were quite small, since in the second half of the fourteenth century they weighed no more than 350 grams. Courtiers sitting at the table with the king or queen could eat such loaves, several per head.

Also read:Broccoli purée and rotten fish. Medieval delicacies of the kings of France

When I see sweets…

The "ordinary" meal was different from what we eat today. First of all it is difficult to talk about the classic breakfast, lunch and dinner in today's sense. At that time, similar dishes were eaten at any time of the day, and there was no difference in the abundance of food either.

When sitting down at the table, three full dishes were eaten each time. First, soups that were eaten "on" bread, then baked or fish (probably with bread), and finally "vegetables", perhaps eaten with groats or pods, and maybe also with bread. 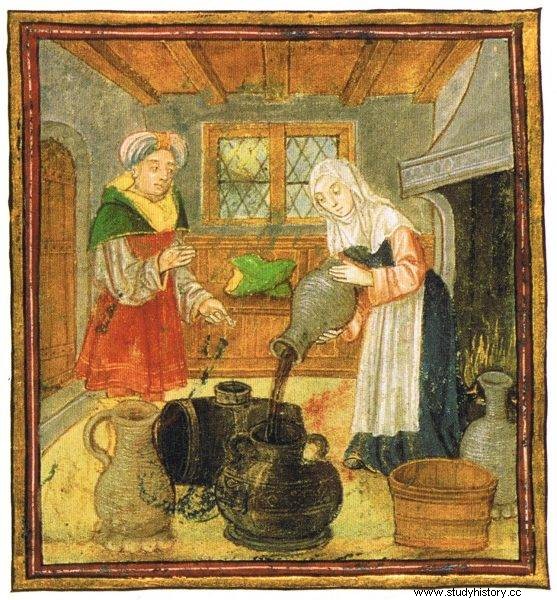 Depending on the purity of the purse, wine, honey or milk (both sweet and sour) were also drunk.

Famous for her spirit and body qualities, Jadwiga Andegaweńska loved bread in any form - from wheat rolls to bagels, cakes, croissants and cakes. So on weekdays she ate another meal late in the evening. At that time, she was served her favorite white bread and beer, sometimes also dried fruits and nuts, both native and imported (e.g. figs).

The popular native fruits were pears, plums, cherries and, of course, apples. They were eaten boiled, fried, baked, stuffed with fowl, made puree, and dried for the winter. Additionally, the diet was supplemented with mushrooms, honey and nuts. It is worth mentioning, however, that raw fruit and vegetables were eaten relatively rarely in the Middle Ages.

Sweets were rarely eaten as hardly anyone could afford expensive and unavailable sugar . Of course, there were plenty of them at the royal court. The so-called preserves, which were made of not only sugar, but also gold or saffron, were a delicacy not only in the post .

The Effects of Gluttony

In addition to the epidemic and low level of medical knowledge, an unhealthy diet and immoderate consumption of food and drinks were one of the causes of high mortality among the Piast rulers. This state of affairs was emphasized by Stanisław of Skarbimierz, the rector of the University of Krakow, who stated that the then, due to bad habits, had a short life:few lived to forty, and only a few died to sixty.

Perhaps it was also thanks to regular fasting and avoiding alcohol - and a great liking for onions - that Władysław Jagiełło later lived to old age?