Sex, drugs and ... the flying Pentagon, the strangest mass protest in US history

On October 21, 1967, about 100,000 people gathered for a peaceful demonstration outside the US Department of Defense headquarters. The protesters had two goals. The first one (for those times) was quite standard - to persuade the authorities to withdraw from the Vietnam War. The second was to get the Pentagon ... to levitate.

The history of the United States is full of all kinds of mass protests, demonstrations and street revolts. After all, the very beginning of the fight for US independence is associated with one of the most famous acts of civil disobedience, that is, "Boston Tea".

As recent months have shown, the tradition of expressing social discontent in the streets of the American nation is not dying out at all. However, while the most recent examples of street demonstrations in the US ("Black Lives Matter" or "attack on the Capitol") were quite violent, the 1967 demonstration became a true symbol of pacifism and the anti-war movement.

The "March to the Pentagon", as the protest was called, turned out to be quite an unusual event. This was because one of its parts was to be ... an exorcism over the US Department of Defense headquarters and making the Pentagon levitate. Under ordinary circumstances, no one would have had such a crazy idea, but the America of the late 1960s was not quite a normal place ...

A few months before the "march to the Pentagon," in January 1967, an event known as "A Gathering of Tribes for Human Be-In" took place at San Francisco's Golden Gate Park. "Human Be-In" was an open-air event organized in protest of the California ban on LSD.

This festival laid the foundations for the development of a new movement related to the hippie community - the so-called counterculture. The hippies themselves evolved from another youth subculture that had been popular in the US since the mid-1950s, the beats ( beat generation - a lost generation) . The fathers of the hippie movement borrowed the ideas of nonconformity and rebellion from beatniks and combined them with the slogans of free love, pacifism and seeking spiritual rebirth. 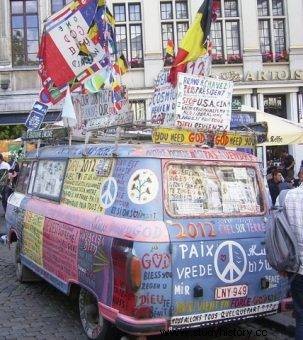 The "Human Be-In" festival turned out to be a huge success. It was then that for the first time such slogans as "Make Love not War", "Fuck Hate" or "Turn on, tune in, drop out" were formulated, which will soon be visible on the banners of the hippie movement.

The "Human Be-In" festival turned out to be a huge success. It was then that the following slogans were formulated for the first time: "Make Love not War", "Fuck Hate" or "Turn on, tune in, drop out" which will soon be visible on the banners of the hippie movement.

Soon, similar events were organized in the largest cities of the United States. Events drenched in narcotic sauce promoted the ideas of free love, tolerance, ecological awareness and the search for one's own way of life. Among all these vague assumptions at hippie parties, an issue that turned out to be important to an entire generation of young people in the US was also raised. It was about consistent criticism of the Vietnam War.

1967 was a period in which the American public increasingly expressed their disapproval of the war in Vietnam. Failures at the front and the increasingly brutal image of the struggle (the massacre of the My Lai village) soon made the anti-war protests more violent.

The "march to the Pentagon" was a foreshadowing of these events. The burden of preparations for the protest was carried by the people responsible, among others for the organization "Human Be-In". Michael Bowen, Abbie Hoffman and Jerry Rubin played the first violin here. Both Hoffman and Rubin then joined an anti-war organization called "The Mobe" (National Mobilization Comittee to End War in Vietnam). 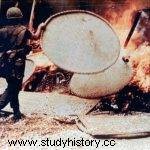 Lieutenant Calley's squad razed My Lai to the ground.

The "March to the Pentagon" was to be the largest protest organized by "The Mobe" in 1967, and the estimated number of participants was to exceed 100,000 people. Initially, the immediate vicinity of the Capitol was designated as the main site for the demonstration, but Rubin said then that the protest would become anti-democratic. So the organizers started looking for a different location.

The idea to replace the Capitol with the Pentagon was given by Michael Bowen. Bowen was an acolyte of the American mystic and spiritual leader John Starr Cooke. Cooke was then living in Mexico, where, together with his followers, he and his followers mainly dealt with taking LSD, experiencing consecutive narcotic visions and building different paths of spiritual development based on them.

Bowen stated that the pentagram-based Pentagon is a clear symbol of the devil and bears major blame for all the evils of the Vietnam War. In his opinion, simply holding the demonstration was insufficient. An exorcism was needed.

The idea of ​​an occult ritual won the support of the rest of the organizers of the protest. Most of them said it would be a good marketing gimmick that would bring even more people to the demonstration. The problem is that some people took the idea quite seriously. According to the finally adopted plan, the participants of the march were to circle the Pentagon, hold hands, and the master of the ceremony was to perform a full-fledged exorcism .

People began to wonder how many people exactly would be needed to circle the building? As the Department of Defense headquarters was about to levitate, it was seriously considered what height would be sufficient. In the course of heated discussions, it was finally agreed that the 3-foot ceiling would be sufficient. It was also important how the foundations of the Pentagon would be destroyed when it returned to its place. Sal Gianetta, one of the members of the organizational staff recalled years later:

One of the organizational meetings lasted about two and a half hours and about 20 percent of that was spent talking about how to get the Pentagon to levitate. There were two military representatives at the meeting in Washington. They stated that there was no chance of any demonstration taking place in the immediate vicinity of the Pentagon. He was like fucking St. Peter. There was no fucking way. When Ab [Abbie Hoffman] heard that, said, "Y'know what, fuck you ******." This fucking Pentagon will levitate so high you won't be able to get up the stairs. What are you going to do then? ”.

The exorcism itself was created by the poet and anti-war activist Ed Sanders and the mystic artist Harry Everett Smith. The authors took care of the smallest details. As you can see, the esoteric side of the demonstration was taken very seriously…

The protest started around noon on October 21, 1967. After fiery anti-war speeches, the crowd of 100,000 marched from the Abraham Lincoln Mausoleum towards the US Department of Defense. In order to prevent the protesters from entering the building, the military deployed on the steps of the Pentagon. When the demonstrators arrived, the exorcism began:

For the first time in history, the Pentagon will be raised thousands of meters [...] All those who want to protect this ritual of love, please join hands. Victory, Victory for Peace. [...] We challenge you, demon, to get rid of the cancer of war generals, secretaries and soldiers who do not know what they are doing, all the intrigue, bureaucracy and hatred.

The incantations were accompanied by hypnotic music and Indian shouts. Unfortunately, the Pentagon did not move. Abbie Hoffman, meanwhile, started pairing random people and persuading them to make love. Sexual acts were meant to increase the power of the ritual. However, the demonstrators' response to this type of proposal was negligible. 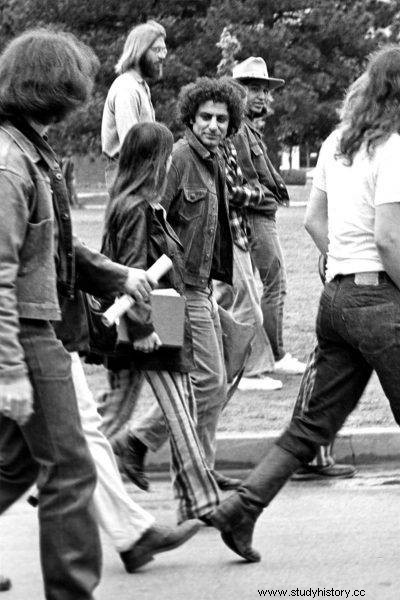 In the meantime, flowers were handed out to the protesters and they, not the levitating Pentagon, became the symbol of the protest years later. As the military moved to disperse overly bloody protesters, demonstrators began to put the daisies they had received earlier in the barrels of their rifles. The photos of this moment soon spread around the world.

The wind of change

Criticism from public opinion was so great that it became one of the main reasons for the decision to withdraw US troops from Vietnam. For building social pressure and the anti-war movement, the "march to the Pentagon" turned out to be a very important event. Yes, the building did not begin to levitate, and the protest itself was pacified quite quickly, but something changed then. Allen Ginsberg, a poet and social activist who took part in the demonstration years later stated:

The levitating Pentagon was a happening that demystified the authority of the military […]. The Pentagon was levitating symbolically in the minds of the people in the sense that it has undermined the so far unchallenged authority of power. Once that happened, when the kid put a flower in the barrel of a rifle, the tension and nervousness that surrounded the power blurred.

Previous Post
Czocha Castle and the legend of a crying child. The gloomy sides of life in a medieval stronghold
Next Post
"A pleasant and modern city". Poznań in the interwar period